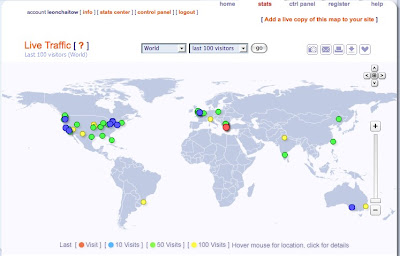 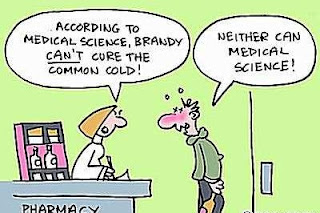 Back in February I wrote a short blog posting about the use of cold, wet socks in
self-treatment of some of the symptoms of a head cold – the stuffy congestion that makes life so miserable during that stage of the condition.
To my amazement that posting still attracts more readers than any other posting – even the ones I regard as being far more interesting and amusing!
Blog writing serves several purposes, and one of these is that it allows a simple stream-of-consciousness flow to emerge.
Unlike most of the writing with which I’m involved it doesn’t need to be carefully crafted (although that would help, you might be saying!) or completely thought through.
Perhaps this is why it is potentially therapeutic (to the writer) in its own way?
If I feel an urge to express an idea or a feeling, off I trot to the blog page. And today I have an urge to revisit the common cold….but before doing so it might interest you to know just how much I know about you?

Tracking you…..
When you reach my blog you might not be interested in a current posting perhaps….in which case you are likely to become one of the brief visitors (10 to 15 seconds is how long about half of all visitors remain!)…or perhaps you find the topic of the day interesting and so hang around for 2 to 7 minutes (becoming a middle range visitor) ….or you might be completely hooked by my ramblings, and stay for 15 to 20 minutes (a few visitors actually do!), trawling through previous postings and downloading some.

How do I know this?
Well there is a whole industry that offers free (with advertising that makes it worth their while), or relatively inexpensive, systems, that track a wide range of data, such as :

I can track all this info …… when I’m in the mood to discover just who is actually reading my jottings… but what it does not tell me is who you are...and that’s frustrating!
The data available does however – via key words, when these are used – tell me what you are interested in (as does the record of which blog postings were visited).
And by a long way, the topic that has attracted repeat visitors, and new visitors (yes, that difference is also recorded), the most – some of whom have used specific phases and key words – are variations on :
‘common cold’ – and – ‘wet sock treatment for cold’.
One visitor from China yesterday used the key words ‘cartoons about common cold’ as a phrase that
led him to my blog on wet socks… now there’s a cultural mix for you to ponder on. And so, in respect for international cultural relations, (and in case he ever returns to the site) I’ve included two cartoons (above) on just that topic!

Those of you who are involved in health care, especially in Europe, are probably all too familiar with the work of Professor Edzard Ernst, Department of Complementary Medicine, Peninsula Medical School, University of Exeter?
He has become a devisive figure, as he pursues an apparent quest to highlight all possible shortcomings in complementary health care (see his recent coauthored book Trick or Treatment – Alternative Medicine on Trial), with little apparent sensitivity towards the at least equal shortcomings in mainstream health care.
Well, back in 1990, Ernst, then a mere lecturer and researcher in Vienna, published a research paper in the British journal, Physiotherapy, on the effects on the incidence and severity of the common cold, when people took cold showers every morning (compared with taking warm showers).
I need to warn those of you who ducked out of the cold sock treatment – this blog posting is about to get seriously less comfortable to read!
Ernst (1990a, 1990b) showed that the regular (daily) use of a cold shower had a progressively beneficial effect on immune system efficiency (although in personal communication he denies that this was what the evidence suggests).

Just for balance ( a rarity in his way of doing thing some might say) Ernst et al (1990) also recommend saunas for cold prevention (remember to finish with a cold plunge though!)

Now a contrary perspective is offered by some…i.e. hot showers for cold prevention!
A particular website has a short video clip that suggests that hot showers prevent colds, because the steam will decongest nasal passages (true), kill bacterial/viruses (untrue), relax you (possibly true), help you be cleaner (undoubtedly true), sleep better (debatable).
I think this view is oversold and is singularly unresearched…just an opinion!

The manufacturers of a well know pharmaceutical product, widely used to ‘kill’ symptoms of the common cold (it’s name – 7 letters – begins with a T and ends with an L) offers the following advice (my comments in capitals)
Tips for Preventing Colds
Frequently disinfect surfaces in your home and office-especially things like phones and doorknobs that many people touch.[GOOD ADVICE – TV REMOTE CONTROLS ALSO NEED REGULAR DISINFECTING]
Wash your hands often. [YES]
Keep your fingers away from your eyes and nose to prevent the spread of germs.[YES]
Avoid close contact with people who have a cold, especially during the first few days their symptoms appear. This is when they are more likely to spread their germs. [YES]
Tips for Treating Colds
A cold has to run its course (usually around a week), but you can make yourself more comfortable while your body fights it off by getting plenty of fluids.[YES]
Drink plenty of fluids, such as water and juice. And enjoy a warm bowl of chicken soup. It won’t cure your cold, but warm liquids can help soothe a sore throat.[YES…AND APPARENTLY CHICKEN SOUP CAN REALLY HELP…SEE BELOW)
Stay comfortable. A humidifier may help ease your congestion and throat discomfort by keeping the air moist.[YES]
To avoid spreading the illness, try to stay away from others if you can- and wash your hands frequently.[YES]

As to chicken soup …. WebMD says: “Chicken soup does help clear nasal clog. Ginger seems to settle stomachs. Dark greens such as spinach are loaded with vitamins A and C. And salmon is a great source of omega-3 fatty acids, which have an anti-inflammatory effect. Quite simply, a well-nourished immune system is better able to ward off infections.”

Apparently chicken soup was first recorded as being prescribed by 12th century physician Moses Maimonides, and its’ therapeutic properties have been studied by a host of medical experts since then….for example Rennard et al (2000) show there are definite benefits!

Also, I highly recommend use of zinc lozenges at the very start of the cold (scratchy throat…)
This opinion is not universally backed by research, but there is quite a lot that supports it (Al Nakib et al 1987, Eby 1994)
One commentator says:
“For zinc lozenges to work, you must (1) use a type with a high percentage of positive ions, and (2) let them dissolve in your mouth every hour or two all day, every day, until you feel better”
Another positive report offers this advice:
” Place the lozenge under your tongue, remember don’t chew it because it will end up in your stomach not stay where it’s needed. Also take zinc right before bedtime.”

What about Echinacea?
Simple answer is – it works…. reducing chances of developing a cold by 58%, and the duration of colds by a day-and-a-half..see report on this link

….and vitamin C?
Maybe…..WebMD reports:
“In a July 2007 study, researchers wanted to discover whether taking 200 milligrams or more of vitamin C daily could reduce the frequency, duration, or severity of a cold. After reviewing 60 years of clinical research, they found that when taken after a cold starts, vitamin C supplements do not make a cold shorter or less severe. When taken daily, vitamin C very slightly shorted cold duration — by 8% in adults and by 14% in children.”

I will now enjoy tracking just how long you stay on the blog-site!
.