HOW TO BOOST THE BENEFICIAL BACTERIA IN THE GUT : PROBIOTICS AND PREBIOTICS

In my work as a naturopath I see many people with digestive problems (“IBS”) as well as chronic pelvic pain and dysfunction.
There is an overlap between these conditions and pelvic dysfunction (“pelvic girdle” problems), which means an overlap between the naturopathic and the osteopathic management of such conditions.
The notes below touch on one of the key features in many such cases – disturbed bowel and urinary tract ecology – where the normal flora have become disturbed by – possibly – antibiotics, steroids (including the contraceptive pill), as well as an unbalanced dietary pattern, usually involving excessive sugar-rich foods and beverages.
This diagram offers a snapshot of the background – and hopefully the notes on pro and prebiotics below will help in understanding one part of the complex picture?
For more on the topic see my book on Candida Albicans 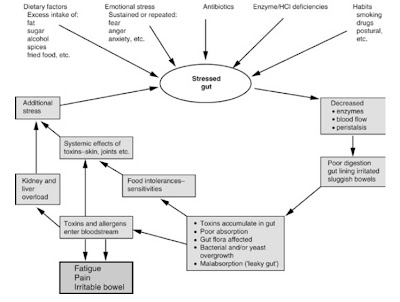