What is Thiele Massage? 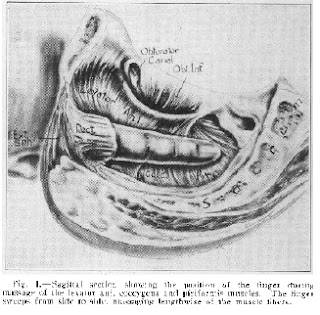 Much of the distress of CPP and its frequently associated symptoms – which may be as varied as interstitial cystitis, stress incontinence and dyspareunia – is amenable to manual therapy interventions.

While there are numerous possible causes and aggravating factors, excessive tone in pelvic floor muscles is a frequently observed feature.

I have emphasised the ‘short-tight pelvic floor’ issue reported by Fitzgerald, since it is now generally accepted that this phenomenon is a key to much CPP – rather than weak hypotonic pelvic floor muscles.
The first modern observation of this in relation to coccygeal pain was in 1859 (by Simpson), as reported in his classic paper “Coccygodynia and pain in the superior gluteal region” by Thiele (1937). Thiele developed a simple strategy for treating high-tone muscles in the pelvic floor – now named after him as Thiele Massage. See the photograph of an illustration from his paper in the Journal of the American medical Association – the legend of which states: “Sagital section showing the position of the finger during massage of the levator ani, coccygeus and piriformis muscles. The finger sweeps from side to side, massaging lengthwise of the muscle fibers.”

The method (Thiele massage) is therefore simple – a series of digital strokes of the key (reachable) pelvic floor muscles, from origin to insertion, for approximately 5 minutes – with periodic stationary periods of 10 to 15 seconds when active trigger points are identified (i.e. where pressure on them reproduces familiar symptoms – for example burning, or urgency, or radiating or distant referred pain). (Oyama et al 2004)

I have also found that it is useful to add positional release methods during such treatment – for example using pressure applied from an external pelvic contact, such as the ischial tuberosity, or the ASIS, in order to markedly modify perceived discomfort/pain for 15 to 20 seconds. Another useful addition may involve having the patient mildly isometrically contracting the tissues being compressed, for a few seconds, to promote relaxation of these.

Fitzgerald et al (2009) strongly emphasise the importance of internal and external trigger point activity in maintenance of CPP – and many associated symptoms.
Loving et al (2012) in a systematic review of evidence, urge caution in interpretation of the evidence to date: “Only small and largely non-randomised studies have been undertaken of physiotherapeutic interventions and this greatly limits the available evidence on which to base clinical practice. High quality randomised clinical trials are therefore urgently needed”